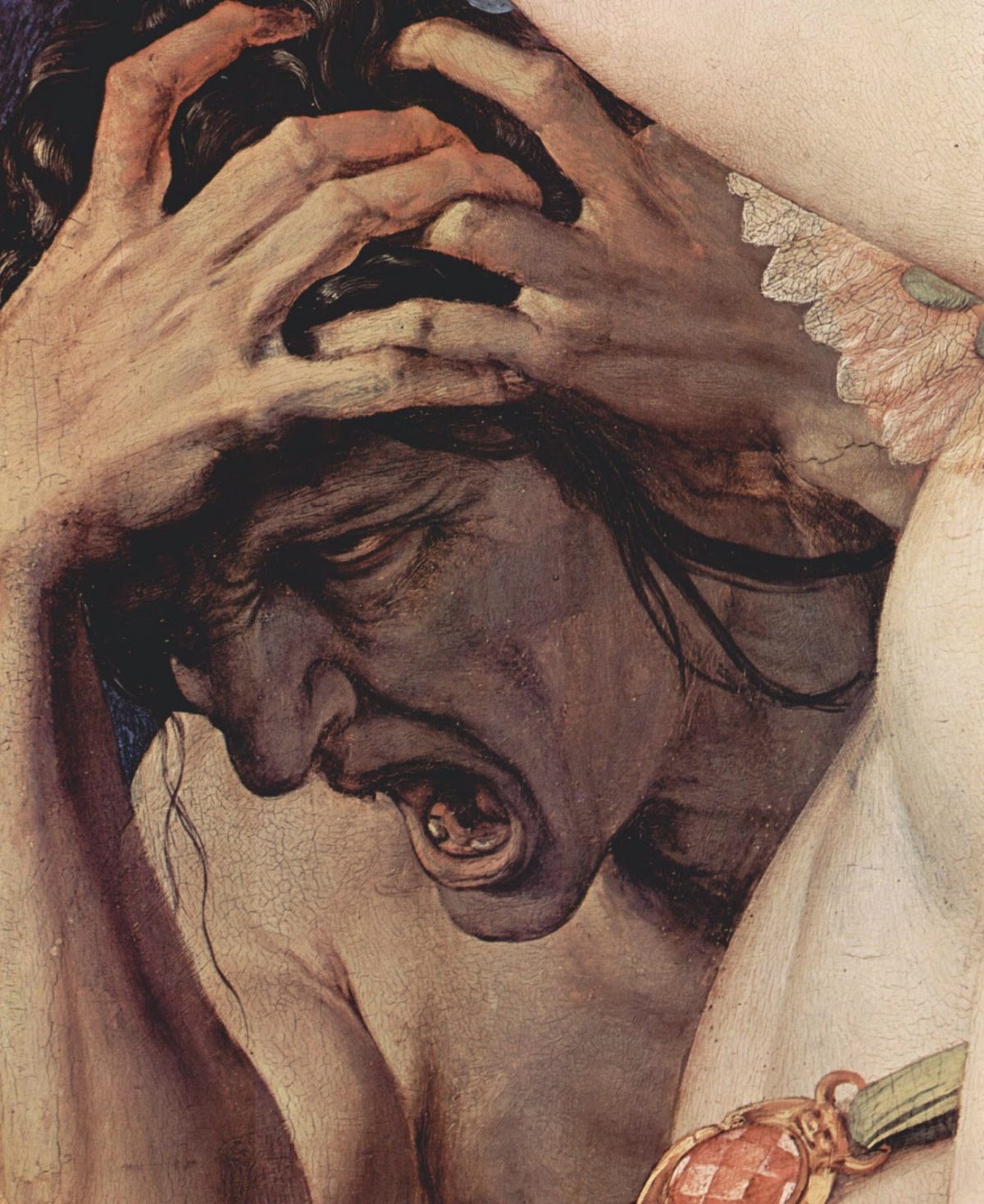 I get a lot of hate mail.  Readers may be illuminated by a sample of what my interlocutors have to say about me-and occasionally-my ideas.  I’ve always found that how a person behaves when their ideas are challenged says a lot about their ideology as well as their character.

I post the best of the hatemail for several reasons, first, it’s entertainment.

Secondly, it serves as a benchmark of sorts; whenever I am wondering if *I* am the crazy one, I re-read them for reference.

Thirdly, it’s a continual accountability check for me, to review and see if those who are willing to say the worst about me publicly have any insight into who I am.

Finally, it’s an act of charity, a sort of prod to repentance and conversion for the guilty parties. I hope that when the offenders see their words posted in public for all to see that their humiliation will move them to contrition and repentance.

“[This is] all about your selfishness and about your narcissm.” -Tori Porterfield

“he faithful must know for their own good that Jeff Cassman is a self promoting crook….. He is a dangerous and morally questionable individual who should not be allowed to speak or lead in Catholic circles.”  Evan Patrick Barnes

“The supersized Catholic family…reckless, irresponsible and selfish…a mark of those who don’t have a holistic understanding of God’s creation.”  Franklin Salazar, Organic Catholic

“I know the type in a suit.  I will write to cardinals to stop you from getting in.  Self entitled idiot.  You are harmful, can’t even do your homework.  Self obsessed.  I hope you don’t hope for political office.”  Lee James Waite

“Liar..extremely deceptive…you went to jail for lying…you even LIED after you got out of jail and said you were vacationing…Catholics lying thru their teeth. u have no idea what the hades ur talking about.”  Michael Voris, Church Militant

“You should spend the next 20 years doing public penance and less time telling people about your “divine law” Simcha Fisher, author of “The Sinner’s Guide to NFP”

“ I will prove why you were only in the Air Force. Just saying. My last name doesn’t get to dictate your racism, bro. You don’t know a thing about me, and to be quite honest, a pretty potent argument could be made that whatever success you have had in life, ranging from aiding and abetting an immoral military-industrial complex to being in bed with the very financial industry that the very theological-doctrinal tradition you claim to fidelity to has condemned for more than a century, might make you a hypocrite. “  Gabriel S. Sanchez, Assistant Editor, Angelus Press

“You are a coward…disingenuous and downright dishonest…”  Father Dana Christensen, Diocese of Sioux Falls

“Half-truth gossip, slander and calumny…you and your iron deficiency…wiggle all you want”, Kevin Liner

“It’s a bad scene to be winning with regard to grave matters during a pandemic. Final judgement will be bad.  Ignorant racist…stupid fuck…Silence yourself as your penance. Clearly you are bad at moral compasses.  Your utter constant need to hurt others and seek gain has not been burnt out of you and will come back to further hurt you, if not at Final Judgement. Repent. Judgment will be harsh.  God will punish you for this. ”  Dan Conway, MD, Drexel University

“A philosophy based on Wikipedia…a screed of ignorance and linquistic deficiency… By your own words you’re condemned. You claim to know the inside stuff about the SSPX and the FSSP. That, in my broad (and, contrary to your limits, international) experience of both groups, would make you either Satan or God. It’s like getting along with Russians and Ukies.”  Jonathan Arrington

“YOURE NOTHING BUT A MALTHUSIAN APOSTATE RADTRAD”   Anyonymous

“I just vomited in my mouth…Protecting and turning a blind eye is an injustice to our children”.  Katrina Dituri

“I’m someone with a background in intelligence…you know nothing about intelligence and have only ignorance and lies”.   Cyril Koob

“Say another word about your anti-Pope and his Jewish religion and I’ll block you and cut you off from the true body of christ” Eric Gajewski, TradCatKnight

“Saint Jeff…the only perfect one left…your SSPX church does not exist.  It is no more…the religion of Jeff…stinking hubris with no place in the Church…[you’re] encouraging others in sin…coward…intellectually and theologically juvenile… filthy pride so common to those in SSPX. Don’t ever think you can instruct or admonish me. You have absolutely no authority over me. Your deceit is disgusting. You are embarrassing yourself. ” Raylan Alleman, author of “Catholic Manhood Today”

“Just know this…. you SSPXers are outed. Theirs a ton of us out there who looked at the society and wondered about you guys. Wondered if you were different from the scumy spineless NO dioceses.. but you and your army of fellow defenders proved.. that in the end you SSPXers are no different.”  Frank Schumpert

“blatant racism, sexism, cruelty, hatred, lying, and contempt for the poor…You coddle a racist…it’s all about abortion to you…you are evil…part of you is evil…coward…so depraved…” Gavin Byrnes

“Jeff pays lip service to protecting babies in the womb but de fide adheres to the structures of sin that lead to it.  He doesn’t argue so much as demand submission to his opinion.”  John Ruplinger

“Your ideas about the faith and history are too radical…you are a very confused person.  I am a great admirer of Lincoln.”  Rick Stika, Bishop of Knoxville, TN

“You’re just masking murder and support of murder under a pseudonym like ‘federalism’…modernist…you cannot justify the murder of children through states rights arguments…it does not pass mustard with God..woe unto you…Get lost your a sick dude your sins are much greater. Your a dirt bag for posting comments out of context. You are not a mutter but a devil.   You bait people then do this? You are a devil.  You support abortion then play the victim? See a shrink . I’m contacting an attorney” Tonino Vicari

“You accepts all kinds of terms perhaps because you’re not catholic.  A bunch of devided [sic] sects cannot be Catholic. SSPX, CMRI, SSPV, Lutheran, novus ordo etc.  Lutherans claim to be catholic too…  You’re someone who believes souls can be saved in false religions.  Stop telling people you’re catholic. ”  Justin Link

“Liar.  Sinful liar.  We understand the SSPX loves you becuase you donate a great deal of money to them….but you’re not contrite….We would’ve left you alone but you’ve been on Twitter attacking our integrity and credibility and telling people not to question the SSPX….lowlife…Why are you lying…you’re lying…” Simon Rafe, Church Militant

“Your posts…are irrelevant.  Get over yourself.  You are really not as smart as you think you are.”   Steve Cullen

“Brain dead asshole..women are objectified…Rape is normal because they do it to their own spouses”  Jessica Colette Dippolito

“Unlike you I don’t pop out a kid every other year and pontificate on how if they can not live a Catholic life in America it’s their fault….I recognize my brothers and I MUST BE AFFLUENT TO RAISE CATHOLICS”.  Robert Stewart

“I am not the one with blood on my hands. you have made a joke out of that family photo you have on your page….This is not Christian….You will have to answer for this one day.   Wade Fackler

“Lol you’re a wannabe. Nothing to do with your saintlyhood or your canonization. Lol trust me…. Nothing to do with how much excessive grace you have received because of your holiness. Lol oh nooooo… It’s on a whole other level. One that you would never get.”  Catherina Monica

“Speaking of poor character…anyways you are find to have your wife all you work..extreme anti feminist views…”  Michael Pasteur

“I don’t know whether to laugh, cry, or simply be annoyed with your flippant attitude about this serious threat to Americans health and welfare….Get educated and try humility.”  Joan Chapman

“Stupid…dismissive…incautious…reckless…Imagine being a smug a**hole all the time…”.  Steve Skojec, 1Peter5

“You tempt God with your arrogance…You are pontificating about stuff you know actually NOTHING about.”  Chris Field

“You’re a truly desperate and pathetic man and I can’t imagine how unfulfilling your life must be to need attention from strangers on the internet to be happy. ….I know lying is your specialty but you need to stop. Really shows how much of a family man you are. I’ll pray for your kids. I hope they end up better than you. But that’s not hard to do.” -Kitty Porterfield

“My demon slayers and commanders are unimpressed. We wait, with our ancient knowledge of right and wrong and that diddling little kids is unacceptable. We have robes and we have belts that we keep the scalps of all the pedophiles on. We chit-chant nightly mostly until 1 a.m. We stay up later on Full moons so we can put all our crystals out to charge. We have vats of blessed salt that we use to protect us from the ghouls in case we are actually awake at 3 a.m…. you know the witching hour. We make our own candles from the beeswax of the hives of honey one of our coven members tends too. We have based our whole investigation off of the swinging pendulem necklace made out of holy relics that I obtained as a gift from an SSPX priest. We ask it questions and if it spins clockwise, the answer is yes”  Ruth Ann Parks Gonzalez

“show me your research, which is non_existent like your intelligence, btw i veiw all americans as being useless nono_thinking idiots slightly above that of apes/” Thomas Niel