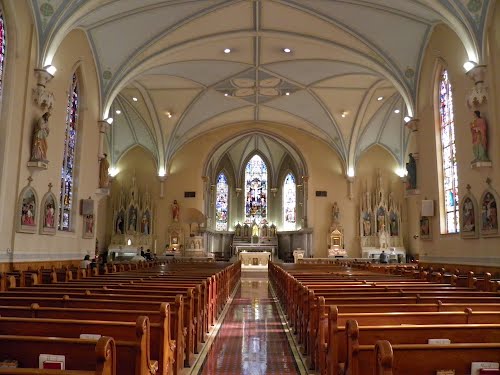 1) the newish Mom who is overly protective and glares at me for letting my toddler roam out of arm’s reach or get too close to her (older than my) child, 2) the 30ish mom who is pregnant and has what appears to be 6 children under five, 3) the 20ish mom who is trying to nurse a screaming infant but is so worried about her modesty she’s brought a queen-sized comforter from home that infuriates the infant and draws attention to both, 4) the mom who brought all four of her kids (ages 11, 8, 5, 3) to the back and the infant is the best-behaved, 5) the mom who loudly threatens her badly behaved toddler but doesn’t actually ever discipline, 6) the mom whose choice of a summer dress failed to anticipate the possibility she would be crawling around on all fours in the back of the church in front of a father of 13, and of course my personal favorite, 7) the comatose mom who neither participates in Mass nor pays any attention to her toddler who clearly has a vocation to be … Read the rest

One of the unexpected benefits of my Fed-funded sabbatical was learning to sing.  I discovered that one of the other guys  taking a break from real life was a classically trained baritone singer.   I thought that singing occasionally might be a great way to escape, so to speak, from the routines of the day and asked him if he’d be willing to spend some time working on it with me.  He was thrilled, and with some ideas from “Singing for Dummies”, we began a journey that would last about 18 months and change my life.

I had always sung in church, or at least, did what I thought was singing, but Scott helped me to overcome that disability.  Twice a week we met in the music room and worked on posture, breathing, expanding the chest, utilizing head voice…all the other things every novice studies on the path to singing (better).  I learned that singing was not just speaking more loudly and slurring words together, but an entirely different function of the body.  Eventually I was able to lead with some confidence our fledgling Catholic group in singing a few well-known hymns and chants at our weekly meetings.

But the real payoff came when I got home, and it wasn’t my conscription into the choir; one night I heard one of my boys singing Tantum Ergo or some other chant he’d heard at Church and stopped in my tracks while he effortlessly sung the notes an octave or two above how … Read the rest