“Let God arise and let His enemies be scattered. Let them that hate Him flee from before His face,” words taken from the Introit for this eleventh Sunday after Pentecost. In the name of the Father, and of the Son, and of the Holy Ghost, Amen.

The great South American Jesuit missionary, Saint Peter Claver (he died in 1654)- he often spent some five consecutive hours in prayer before going out to fulfill his duties. His basic schedule, for something like forty-five years of his life, ran like this: As night fell, he slept for a short while, often three hours or so. Then from midnight to 1:00 he got up to enjoy, so he said, “the silence and peace which God granted him when all slept”.

Then either kneeling or prostrate on the ground, often with the symbols of the Passion on him- like the crown of thorns or a rope around his neck or crucifix in hand- he prayed until 6:00 in the morning. Then he went out to work.

Not surprising, like many of the saints, he had a special gift for bringing 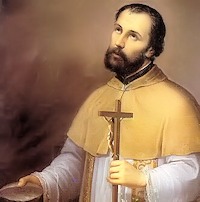 souls to God- especially those who seemed farthest away. Among them were those condemned to death by the state; those under the death penalty, the capital punishment. They became his friends, and the officials always called him in shortly before their execution. He would hear their confessions and offer Mass for them in prison. He often instructed them … Read the rest