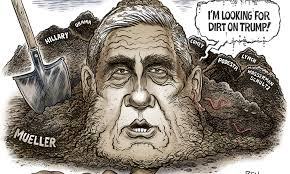 Years later I ran into Mueller, and I told him of my disappointment in being the target of a sting where there was no reason to think that I would knowingly present perjured evidence to a court. Mueller, half-apologetically, told me that he never really thought that I would suborn perjury, but that he had a duty to pursue the lead given to him. (That “lead,” of course, was provided by a fellow that we lawyers, among ourselves, would indelicately refer to as a “scumbag.”)