Hatred often reveals itself in violent and stunning flashes, envy eats away predictably, consistently, eternally and often serves to cover up it’s owner’s shame because the emotions it brings forth from that well of victimization which it has carved out serve to block whatever remaining conscience the owner has remaining, leaving them in a perpetual state of self-inflicted pain and pity

I have known many envious people in my life, and never found their company pleasurable.  While hatred can be satisfying for a 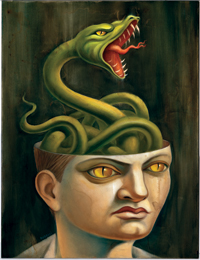 brief time, even entertaining when its excess boils over into comical antics, envy burns somewhat more discreetly but far more insidiously.  While hatred often reveals itself in violent and stunning flashes, envy eats away predictably, consistently, eternally and often serves to cover up it’s owner’s shame because the emotions it brings forth from that well of victimization which it has carved out serve to block whatever remaining conscience the owner has remaining, leaving them in a perpetual state of self-inflicted pain and pity.

This life we live here, satiated in every physical way and yet so desperately hungry in the ways that matter, serves as a frequent exhibition of this pitiful vice.  I am reminded of it often as I hear petty criticisms spew forth from the mouths of those who, having been failures in whatever pursuit they began, find pleasure only in lamenting others.  No matter how far they have fallen, they always find something to resent in another, usually, more quietly suffering individual.  I am not immune from it, in fact, I am the worst of them, because having been granted by God greater fortune than most, I still find the time to wonder, indeed, seethe, why it is that I cannot compose prose like Hemingway, or music like Mozart or thoughts like Aristotle, although I would not desire any of their lives.  I am merely a plodder, and worse, a pedantic, according to my critics, but my life has been rich.

And yet I cannot but be irritated to find the Supreme Pontiff urging me and those like me to turn to the State in hopes that society’s ills will be solved-or even lessened-if only we will a) transfer our wealth to Big Brother and b) trust Big Brother to look after us.  In the old days, Popes would exhort people to turn to Christ and to give all their belongings to the poor (or at least to the Church), and that this would bring about eternal happiness.  Many a Protestant church was founded and funded on this very promise.  But those are the old ways, and the new ways are like honey for our ears, right?  Why give to the poor, or to the church, when we can give to the government, or rather, submit to the government’s coercive power through unwilling confiscation even when we find it morally objectionable.  So why do I find the Francis way so…repulsive?

Because it is neither the divine way or the way of tradition.  In the very story which the Pontiff cited, Luke 19 and the story of the repentant Zaccheus, we do not find Zaccheus turning over the greater portion of his wealth to Ceasar for the Emperor to distribute according to his understanding of the common good, but rather, this man moved by God to give half of his wealth to the poor and to repay four-fold anyone whom he had harmed.  Perhaps the divine physician neglected the part about the state in this matter-although he seemed wise enough to the ways of the world to include Ceasar’s role here.

Catholics have always believed that corporal works of mercy are obligatory, that is to say:

After the ink had dried, apostolic successors continued to teach faithfully the essence of Christ’s message.  And yet even this has been co-opted by the Marxists.  Just today I engaged an apologist for the far left in a conversation about this matter and he dared to cite Rerum Novarum in support of Francis’ redistribution scheme.  For those 99% of you who have never heard of one of Pope Leo XII’s outstanding encyclicals, it is a brilliant defense of traditional Christian teaching regarding authentic “social justice”.  Nowhere in that encyclical will you find the word “redistribution”, and when Leo XIII mentions the role of the state he writes:

Now a State chiefly prospers and thrives through moral rule, well-regulated family life, respect for religion and justice, the moderation and fair imposing of public taxes, the progress of the arts and of trade, the abundant yield of the land-through everything, in fact, which makes the citizens better and happier. Hereby, then, it lies in the power of a ruler to benefit every class in the State, and amongst the rest to promote to the utmost the interests of the poor; and this in virtue of his office, and without being open to suspicion of undue interference – since it is the province of the commonwealth to serve the common good.

Regrettably, among modern Catholics, who are far more distasteful than a zealous bible-only evangelical whose simplicity covers up for an array of theological blunders, there is a tendency towards neo-ultramontanism, i.e., the “Pope is always right because he’s the Pope” argument.  This was condemned at the First Vatican Council but is popular today, especially among reverts and converts from fundamentalism.  They have rejected the personality cults of their former fundamentalist preachers for a similarly unthinking and mistaken cult-like following of the Bishop of Rome.  This is not the Catholicism that protestants, Jews and Muslims once respected and feared, but a ‘movement’ that is now laughed at.  If the people who have opposed the Church from the beginning are happy, and those who left it out of a sense of conscience now find it embarrassing and the Muslims who have fought it for 1400 years have long since abandoned respect, in what corners will the Church find sanctuary (or converts)?  If no one fears the Vicar of Christ, what does that say for the authority he wields or for the respect they would give He whom he represents?

I do not recall however, ever having heard, except from the lavender mafiosa and the Junta de la Theologica Liberacion, how these corporal works previously mentioned are mercy are to outsourced, or to use a less offensive and literal word, delegated, to the State.  Were we to follow this highly imprudent counsel, we would be depriving ourselves of the opportunity to do good works, to merit grace by our voluntary cooperation with the will of God and our co-redemptive act of sacrifice, and further, we would be squandering our wealth and depriving the poor of benefit, for we all know the government can be counted on only to do very poorly and at great expense what we could do easily, more effectively and quickly and at no cost.  Innumerable pompous community volunteers will be employed by the central government to give what remains of your money away to a very small number of their friends and relatives.  They might even be truly deserving, but instead of seeing in their benefactors the graciousness and selflessness of a Christian, they will see the benevolence of their ruler.  And they will vote for him, over, and over again.

I fear the former Cardinal Archbishop of Buenos Aires has been infected by that same fallacious, Marxist reasoning which claims that if the rich are getting ‘richer’, the poor are somehow harmed.  Although my net worth today is only a fraction of what it once was, and in fact may be negative by many zeroes considering my future unfunded liabilities, I am in no way harmed by Warren Buffett’s growing wealth, unless it is my own envy that eats away at my heart, which is already troubled enough by the prospect of finding two suitable convents for my daughters (they don’t get along).

There is no evidence, however, the poor are harmed by the accumulation of wealth by the rich.  In fact, the evidence strongly condemns this theory; the poor today suffer from diseases which 100 years ago were rare even among nobility, viz., obesity and diabetes.  It is better to be poor today in the United States (and most places) than to have been royalty in the houses of Europe 100 years ago.  On yet another anecdotal level, I find as I drive through the ghetto that the average car parked in front of houses there  is many years newer than mine and the quantity of gold and silver worn by the people similar to that held by an affluent Indian jewelry merchant.  Don’t get me wrong, I do not envy their possessions, I have had them (and then some), and lost it, and found I don’t miss it.  Those possessions are like shiny anchors.  At best, they weigh you down and you worry about using them.  But they are not truly poor (except in the only way it matters).

And yet Francis is popular and so are those who share that sorely misguided worldview.  His popularity is a testament not to the world’s thirsty longing for truth but to their degree of surrender to envy.  If only Obama were a little less smug and a little more competent he, too, would still be popular.  But that’s another story.