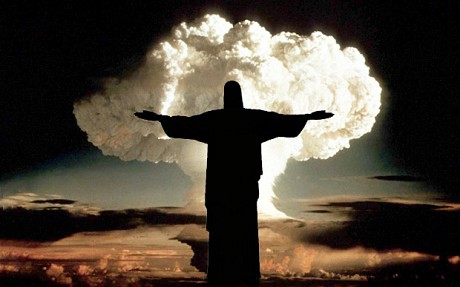 Having abandoned our own constitutional republic for a corporatist mobocracy, today we seem to be fighting offensive actions designed to force secular democracy on others.  This wouldn’t even satisfy the neo-conservative principles I once believed in, and that many on the right still cling to as if they were taught by Christ Himself.  Trump’s recent bombing of Syria brought out the worst in the Right, most of whom applauded the decision, but none of whom could explain why it is good that we helped create, fund, arm and train ISIS, and bomb their enemies (who have a history of protecting Christians from Islamic persecution, and who, BTW, have done nothing to the United States).

When I explain to those who advocate for these offensive wars that we are actually guilty of far worse than what they claim the enemy has done to us, hysteria ensues.  And yet it is undeniable (even the Pentagon admits this), we have killed hundreds of thousands of innocent men, women and children since Muslim terrorists killed 2,977 people on 9/11.

None of these people did anything to us, and yet we killed them.  They pose absolutely no threat to us at all.  We killed them for a political objective.  How then are we different from the terrorists who attacked us on 9/11?  How are we not, in fact, far worse?  And….we’re not done yet.  There is no end in sight, in fact.

Another rarely discussed point is the cost to our own soldiers, and their families.  Thousands have died, tens of thousands more suffer from grievous physical and mental wounds, and more than 100,000 have committed suicide since 9/11.  For what?  As a people we are less free than ever, bankrupt and the threat from Islamic terror remains (who can be surprised given the number of husbands, wives, fathers, mothers, sons and daughters we have killed).

As as consequence of my study of the question over the last 20 years, I have gradually discouraged my sons and other potential recruits from volunteering for military service.  I have a long list of reasons, of which the likelihood of participating in immoral wars is just the first.

Whether you agree or not with the Just War Doctrine, I encourage you to read this provocative article.