Over the course of my 40 months in federal custody, Catholic services were rare.  In contrast, evangelical protestants had frequent-as often as daily-services.  The Jehovah’s Witnesses and the Nation of Islam were also very active, both in their evangelization and their activities.  It was not at all unusual for the Catholics to go months without any services at all, and even when they were scheduled, they were often as not cancelled.  “Security concerns” were usually the reasons offered, although I was in a minimum security camp with no fences or guards, with access to cars, knives, heavy machinery and chain saws, and these same ‘security concerns’ never impeded the protestants from worshiping, studying the bible, or just gathering for fellowship.

The Bureau of Prisons operates more than 119 prisons holding more than 200,000 men and women and is institutionally anti-Catholic.   During my time in the BOP, I experienced constant harassment, discrimination and retaliation for my attempts to practice my faith.  I made no attempt to lead a crusade, become a martyr, or make ‘waves’ within the system, or even to gain the same level of rights the other inmates had to practice their faith; rather, I wanted access to the sacraments on a semi-regular basis.

For respectfully expressing these opinions at the lowest levels of the BOP, and gradually working my way up the chain of command during my time at United States Penitentiary Marion, Satellite Camp, I was threatened, had my locker tossed, given extra duty, forced to work multiple jobs, watched my personal property stolen by staff and was retaliated against in ways small and large.  I was in no way unique, as dozens of Catholic inmates who transited through Marion during my time there shared identical stories of discrimination over the course of their 5, 10, 20 or 30 years in federal custody.

The consequence of this hostile environment towards the practice of the Catholic faith is for many men, despair, depression and abandonment of the faith altogether.  The very men who most need the opportunity to examine their consciences, hear the message of forgiveness and redemption, repent and experience the forgiveness of God and experience the graces which flow to us through the sacraments given us by Christ are denied them.

Worse, the hostile environment created by the BOP is not solely to blame.  The protestants have frequent services because they have the people, whether professional ministers and preachers or volunteer laity.  Their numbers and enthusiasm create an environment within the structure that offers a sort of protection from hostility-if the system offered it, which it does not.  (At USP Marion, the entire staff of chaplains and religious services personnel are protestant).

In my 40 months in custody, I received only three visitors who I was not related to by blood.  One was an ordained Presbyterian minister, the other an agnostic who refers to himself as a heathen, and a Catholic priest.  The Priest came once to hear my confession.  The other two came a few times a year.  They cared about how I was doing, and asked how they could help.  If a man 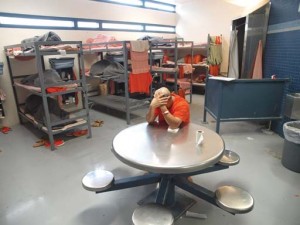 who was raised in the faith and has been an active member of the Church for his entire lifetime does not get visits from his fellow Catholics while in prison, who is it that does?

In fact, I know that my experience was not unusual.  The more ‘religious’ the family and friends of the imprisoned, the more likely they are to be abandoned, shunned and ignored.  In contrast, for those inmates who are career criminals, their families, friends and associates view incarceration as an unpleasant, but necessary ‘cost of business’.  Incarceration is a badge, a sign of credibility, proof of success and rising importance in the criminal world.  For the white collar christian, it is akin to catching leprosy.  Letters, calls and email are ignored as if they could transmit the contagion.  Often as not, the “good” christian relatives of the incarcerated deny their kinship or disavow them entirely.

Before I went to prison in chains, I visited a few times as part of a Christian ministry.  I wish I had done more then.  I wish I had stayed in contact with the convict I befriended.  I wish I had sought out the families of incarcerated men to help them with hope, friendship and prayers.  I wish I had recruited others from my then-extensive network of Christian friends.  I wish I had given a small part of my life to these untouchables.  Now, I’m one of them and can’t help them, except by telling this story.