Yesterday I got into an argument with a bright gal I knew in high school. She’s doing graduate research work at Vanderbilt and has decided she’s an expert on the Wuhan.  The gal was doing lots of sighing and impatiently lecturing me on why we must all wear masks all the time and that any contrary opinion or conduct meant I didn’t deserve the rights and privileges of a citizen (let alone that of a veteran).
You probably know where this is going.
You all know that I don’t mind people wearing masks who are sick, or vulnerable, or who must in order to safely fulfill their duties according to their state in life.  I’ve even organized the purchase of masks for liturgical occasions.
However, I pointed out that even the N95 masks often worn by medical personnel don’t protect you from the Wuhan (these masks are designed for dust, mists, fumes etc., and only offer 95% protection down to 0.3 microns, while the Wuhan virus is 67% smaller than that at just 0.1 microns in size). 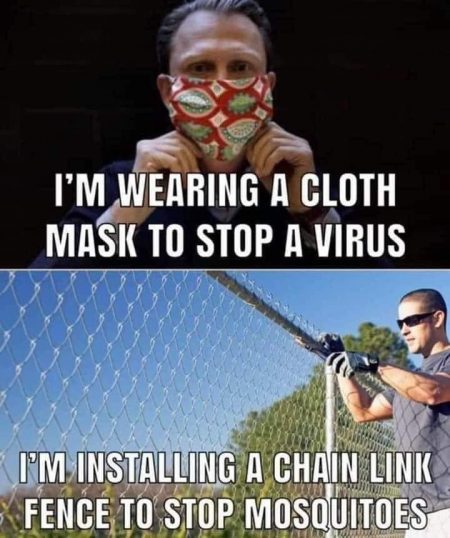 Of course, the cotton masks that most of us are wearing in public so we don’t go to jail merely increase the risks of hypoxia, hypercapnia, vertigo and seizures (plus minor stuff like headaches, tinnitus and cognitive impairment).
Anyway, she angrily demanded to know my sources, so I cited the CDC, the WHO, the New England Medical Journal plus the manufacturer of the masks on this point.
I mean, we all
… Read the rest

It’s time for the annual controversy; was the American Revolution a ‘Just’ War according to traditional Christian dogma (best explained by Aquinas)?

Readers may know that I dislike most of what the central government does, favor states’ rights and do not shy away from correcting widespread Yankee revisionist history about the origins and purposes of the War of Northern Aggression.  That having been said, I am among those who look upon that pitiful history of our country and learn the lessons it offers us.  Among them is this; neither peaceable or armed rebellion against this government has a reasonable chance of succeeding.

These are not the only considerations, of course.  We can look to Thomas Aquinas for some guidance on the question of just war.  It seems to me the motives could be just.  For example, I find many of the policies of the central government to be immoral and dangerous.  The fears of the founders have come true; the government they constructed is increasingly hostile towards the citizens it exists primarily to protect.  This is the nature of governments.  They understood it.  Either we do not, or, as I think is more likely, we do, and we simply want it to be ‘our’ government that we wield against them.  This is basically the argument of the Republicans now.  The Democrats have long since stopped pretending they didn’t want a all-power state a la Mao or Stalin.

In theory there could be a peaceable secession.  This would satisfy Thomas’ “means” question.  However, it seems to me the War Between the States already proved that our central government will not tolerate … Read the rest