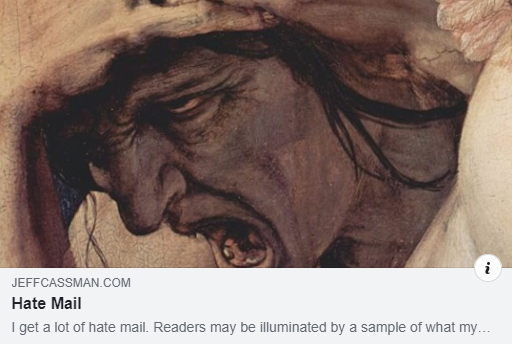 As I’ve mentioned before, I get a lot of hatemail, and occasionally threats. The threats don’t bother me because the dangerous people act, rather than threaten.

I post the best of the hatemail for several reasons, first, it’s entertainment. Secondly, it serves as a benchmark of sorts; whenever I am wondering if *I* am the crazy one, I re-read them for reference. Finally, it’s an act of charity, a sort of prod to repentance and conversion for the guilty parties. I hope that when the offenders see their words posted in public for all to see that their humiliation will move them to contrition and repentance.

So yesterday when I received a PM from one such offender asking me to remove his diatribe from my site, I was hopeful that there was some element of this tertiary reasoning at work.

He called me the devil and claimed I supported abortion, then said he was contacting an attorney because my posting of his public comments amounted to defamation.

Page updated with the latest.